MOSCOW, Russia (AFP) — Russia will flex its military muscles and hold the biggest war games since the Cold War era next month, including almost 300,000 troops and 1,000 aircraft, the Russian defense ministry said Tuesday, leading NATO to warn of a “more assertive Russia.”

The Vostok-2018, or East 18, exercises simulating large-scale warfare, which the Kremlin called “justified,” will be carried out from September 11 to 15 in the country’s east, with troops from China and Mongolia also taking part.

Defence Minister Sergei Shoigu said the exercises would be similar in size to those held in September 1981 by the Soviet authorities, called Zapad-81, or West 81.

Those were unprecedented at the time in terms of the number of troops and military hardware, with around 100,000 troops involved, Russian television reported.

“This will be something of a repeat of Zapad-81, but in some senses even bigger,” Shoigu said in comments reported by Russian news agencies.

The war games come as Russia is hit by the latest round of US sanctions and faces even harsher ones over its alleged role in a nerve agent attack in Britain, with relations with the West at their lowest ebb since the Cold War. 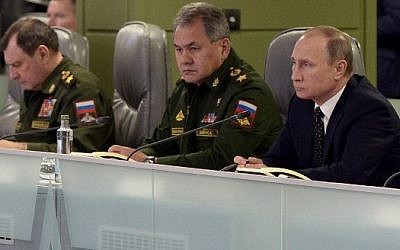 NATO spokesman Dylan White said that since Vostok-2018 would take place east of the Ural mountains, Moscow was not obliged to notify the West or invite observers from the Organisation for Security and Cooperation in Europe, although an invitation had been extended to military attaches.

Meanwhile Kremlin spokesman Dmitry Peskov defended the drills telling journalists that spending state funds on the country’s defense capabilities was “justified, necessary and the only option,” despite the country’s economic problems.

“More than 1,000 aircraft, almost 300,000 troops and almost all the firing ranges of the Central and Eastern military districts” would be involved, he said. “Imagine 36,000 pieces of military equipment moving together at the same time — tanks, armoured personnel carriers, infantry fighting vehicles. And all of this, of course, in conditions as close to combat as possible.”

Chinese troops have also begun arriving by train with their equipment in the region east of Lake Baikal, the ministry said. 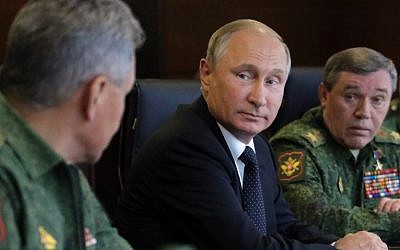 Under President Vladimir Putin, Russia has massively upgraded its military equipment and modernized the armed forces, which have demonstrated their increased strength in operations in Syria in support of President Bashar Assad.

While having a practical purpose of testing military skills, drills are also designed to show a country’s potential opponents how it could behave in a real conflict situation.

NATO claimed Russia could have been massively under-reporting the scale of the exercises, which some of the alliance’s eastern members said involved more than 100,000 servicemen.

In 2015, Russia held drills involving 80,000 troops in regions spanning the country from the Arctic in the far east to the southern Caucasus.

A year later it held spectacular land, sea and air exercises in Crimea, annexed by Moscow from Ukraine in 2014
previous post

US sailor shoots dead workers at Pearl Harbour navy base